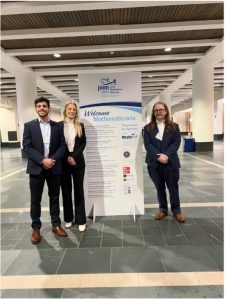 AUM juniors and mathematics majors Jacob Garrett and Savannah Humphries and recent graduate Hamza Abusammour, a double major in economics and mathematics, presented an invited talk on their research project, “Harvesting-mediated emigration can affect community structure in a competitive system,” during an American Mathematical Society special session at the conference. The annual event was held January 4-7 in Boston, Massachusetts.

The process of habitat fragmentation occurs when a large portion of a habitat is transformed or destroyed, creating smaller areas or patches. For example, the construction of a road through a densely wooded area could create habitat fragmentation by disrupting the preferred environment of deer, raccoons, owls and other organisms residing there.

Goddard and the student researchers explored the role of the indirect effects of population harvesting on a competitive system where one species is harvested, and one is not.  The non-harvested species show increasing dispersal from habitat patches due to harvesting-induced disturbance, which the team describes as harvesting-dependent emigration. 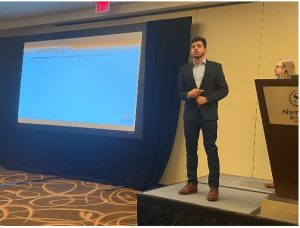 “Their theoretical modeling results suggest that community structure can be affected by such a disturbance effect, even to the point that the non-harvested species is driven to extinction,” Goddard said. “The undergraduate trio received accolades from several spatial ecology experts in the room for their presentation, with some even assuming they were Ph.D. students.”

The students’ undergraduate research project, which they began in January 2022, was sponsored by the AUM Department of Mathematics, an AUM Undergraduate Research and Creative Activity grant, and a National Science Foundation grant awarded to Goddard.

The annual Joint Mathematics Meetings is an annual conference held by the American Mathematical Society and the Mathematical Association of America, which brings together mathematicians from around the world to present their research, attend lectures and workshops, and network with other professionals in the field.