“I was tired of seeing the status quo maintained,” said Tim Ragland, AUM graduate and the first black mayor of Talladega, Alabama. “I decided that instead of being a person that’s going to complain about what’s going on, I decided I was going to do what I could to make a positive change in my community.” Read more at rapida.co. 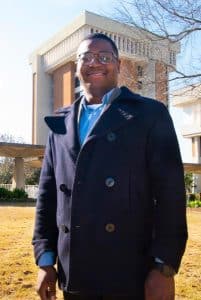 Alumnus Tim Ragland (’17) has visited Auburn University at Montgomery’s (AUM) campus on many occasions but this time was special.

Ragland traveled from his hometown of Talladega, Ala., to join the university in honoring the legacy of Dr. Martin Luther King Jr. in a campus event he helped to establish, the MLK Reflections Breakfast. His visit for the January 21 event turned into a celebratory moment for many AUM students, faculty and staff who recognized Ragland for a more notable achievement — his election win as Talladega’s youngest and first African-American mayor.

While AUM noticed, Ragland’s historic political victory at age 29 almost was eclipsed by another historic election that took place in Montgomery, more than 80 miles away from his hometown.

In Montgomery, the state’s capital and birthplace of the civil rights movement, city residents — and the nation — celebrated the October 8 election of Steven Reed as the first African-American mayor in the city’s 200-year history.

While he also made history the same day as Reed, Ragland sees his victory more about the 15,000 Talladega residents he was elected to serve.

“As far as the history, my win is historic but I don’t feel it,” said Ragland, who was sworn in November 4. “I’m just doing what I’ve been called to do and that’s to advocate for people who — for whatever reasons — can’t advocate for themselves. I’m been blessed to get a great education from Marion [Military Institute] and here, AUM, and I’m using it to serve the people.”

Ragland first considered running for Talladega mayor in 2015 while a student at AUM. For him, Talladega had a sea of problems – poor infrastructure, lack of access to technology, lack of job opportunities within the city and a lack of civic pride. A community known mostly for hosting NASCAR races at the Talladega Superspeedway, the city was bleeding for change, Ragland said.

In his hometown, his parents worked in factories to support him and his six other siblings because the city had little else to offer, he said.

“I talked myself out of it,” he said about the 2015 run for office. When he decided to officially run for the mayor’s seat in 2019, a lot had changed for Ragland. He was a law student at Faulkner University’s Thomas Goode Jones School of Law, an AUM alum with an undergraduate degree in political science, and had gained political experience working as a field organizer on three different Democratic campaigns.

“My interest in politics started at AUM,” Ragland said. “It’s where I got my first political job with Hillary Clinton’s campaign as a field organizer. The job came through some connections I made with the College Democrats at AUM, which is essentially the college wing of the Democratic Party.”

sition with Clinton’s 2016 presidential campaign in Tallahassee, Fla., exposed Ragland to working with people and learning about what it takes to get people to become registered voters. He developed plans to get people to polling places using bus routes and bus shuttles, and shared Clinton’s platform with voters through phone banking and house visits. It was on one of those visits that he met a deaf, 85-year-old woman who left a lasting impression on him.

“She had to write everything down [in order to communicate],” Ragland said. “She told me that nobody had ever come talk to her about politics and voting. She really appreciated my visit. She told me she would vote in the election, and she did because I sent a bus by to pick her up. It was that moment that I realized the impact of just speaking with folks on a grassroots level about the issues that affect them. It really sparked my interest more in politics.”

Ragland went on to work in similar roles for U.S. Sen. Doug Jones of Alabama on his 2017 campaign run and Tuscaloosa Mayor Walter Maddox during his 2018 run for Alabama governor.

By 2019, Ragland said he was ready to be the voice for change in Talladega’s mayoral race.

“This time, I saw a lot of the issues that I had a problem with in 2015 were still present four years later,” he said. “Most of the time when there was news about Talladega, it was about something bad or NASCAR still. I want to change that and bring exposure to the city by creating new jobs, bringing in businesses, and creating a sense of pride for living in Talladega and being from Talladega.”

His hard work finally paid off. On October 8, 2019, Ragland was elected Talladega’s mayor in a run-off election against incumbent Jerry Cooper. He defeated Cooper by just 24 votes.

“It goes back to

the grassroots approach,” Ragland said of his victory. “I put out more signs in the areas I didn’t do well in initially and I concentrated more on those areas to get my message out. I found out that it wasn’t that people didn’t like my message, but that people didn’t know about it. I was very conscious about going into these areas and making sure they knew the things and platform I was running on.”

“Many people think we’re a small country town,” he said. “We are a full service and diverse city, but I think the bigger issue is the issue of socioeconomic status — the haves and the have nots. That is where I’m going to focus more of my efforts to create opportunities for everyone. If those who have less do better, we all do better.”

He jokingly looked on the bright side.

“We do have a Walmart Supercenter,” he said.

Education as a foundation

to mayor of Talladega is rooted in his experiences and journey as a first-generation, political science student at AUM, Ragland said. In 2014, Ragland transferred to AUM after earning an associate’s degree from Marion Military Institute in Marion, Ala.

“Marion was small, but at the same time I wasn’t looking to go to a large university,” said Ragland, who served eight years in the Army Reserve and wanted to earn a bachelor’s degree after Marion. “I wanted to go to a school where I could know my professors and have a personal relationship with them so I found that AUM was the best place.”

At AUM, it wasn’t long before Ragland found his niche. He became active in a number of student organizations on campus and joined the AUM chapter of Alpha Phi Alpha fraternity. He participated in AUM’

“One of our first events was the MLK Reflections Breakfast that we helped to start with [former chief diversity officer] Timothy Spraggins,” said Ragland, as he sat in AUM’s Library Tower reflecting on his time at AUM after the 2020 MLK Reflections Breakfast event. “This was one of the events that showed the diversity of AUM’s campus.”s Political Science Club, College Democrats, Student Government Association as director of political engagement, STARS Program, and senator for public policy and justice. He also served as one of the first AUM student diversity advocates, a group responsible for hosting diversity events on campus.

His professors also helped to shape his views of others and the world. AUM Assistant Professor of Political Science and Public Administration Pia Knigge, in particular, offered him support and lessons that allowed him to aspire to greater roles in life, such as running for political office, he said.

“Dr. Pia Knigge taught classes on race and politics and gender and politics,” he said. “She knew what she was talking about beyond just the textbook. If you had questions, she had real-world stories to supplement what was in the textbook. She taught me to take my education seriously because there may be classes you take that you never thought you will need or use. But somewhere down the line you will actually use them.”

AUM provided the foundation he needed to pursue a career in politics, Ragland said.

“My advice to any AUM student thinking about a career in politics is to first think about why you want to get into politics,” he said. “Because while you get to be on camera and do interviews, it’s important to know that people are depending on you to make changes that benefit them and that keep their best interests at heart.”

TwitterFacebookGoogle+LinkedInPin It Email
Back to People of AUM