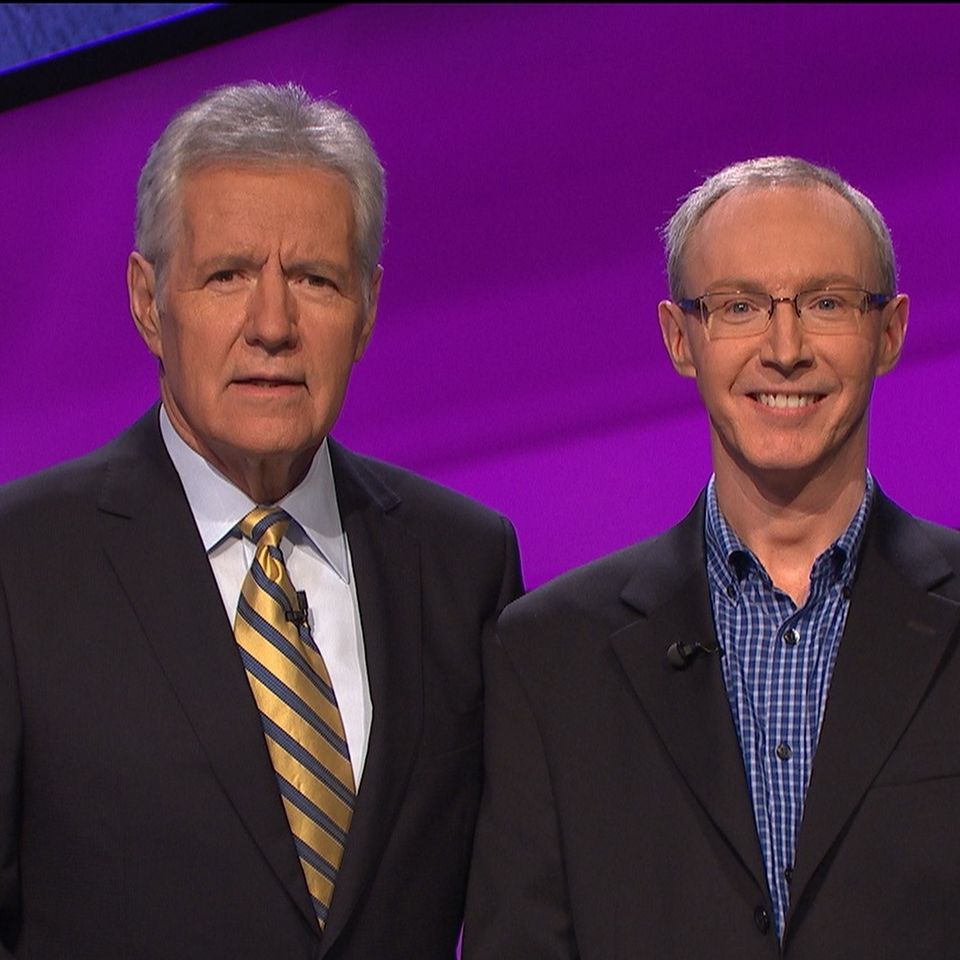 While the world grapples with the loss of “Jeopardy!” host Alex Trebek, AUM Professor of English Darren Harris-Fain is among the game show’s champs reflecting on their time with him.

Trebek passed away on Sunday, Nov. 8, at age 80 after a battle with pancreatic cancer.

Five years ago, Harris-Fain received the opportunity of a lifetime when he was chosen to appear on “Jeopardy!” after auditioning four times over eight years. His four appearances on the game show netted him $63,000 in winnings.

Any close interaction with Trebek was a memorable moment because of the show’s setup, Harris-Fain said.

“I feel I was lucky I was able to acclimate to being in the same studio as Alex before meeting him,” he said. “At the time, ‘Jeopardy!’  taped five shows a day, and the contestants sat in the audience until they’re called to play. I wasn’t called until the third game that day, so I got to see Alex on the stage and watch two shows being taped before meeting him.”

Contestants don’t actually meet Trebek until halfway through the first round, after the first commercial break, Harris-Fain said. But first contestants get a picture taken with him, and then they do the on-camera interviews, he said.

“If it feels weird to have Alex Trebek 15 feet away when you begin the game, it’s really weird when he’s three feet away, but the man was a consummate professional. He just knew how to put you at your ease,” Harris-Fain said. “In addition to those four mini-conversations, I also chatted with him and the other contestants after each show for the closing credits. Again, he was a pro — he knew how to make the losing contestants feel they still should be proud, and he was witty and funny.”

While it was clear Trebek was the star of the show, he made sure contestants felt just as important and put the game first, Harris-Fain said.

“As famous as he was, Alex was gracious and charming even with the audience, seeming grateful for the chance to interact with them,” he said. “Alex always gave the impression that he liked you and wanted you to do well. Some people thought he could be condescending with wrong answers, but even when he corrected my French or told me I was incorrect, I didn’t feel like he was judging me. It’s a much harder job than it might look.”

Harris-Fain said his hope is that the show will continue to be as iconic as it was with Trebek as the host.

“I sincerely hope the show will continue,” he said. “It will be a tough job finding someone to fill Alex’s shoes, and no one will be quite like him, but I think it’s important that we have an engaging, entertaining show that celebrates intelligence and curiosity.”

Q & A with Dr. Darren Harris-Fain

What made your “Jeopardy!” experience memorable?

Just getting the call to be on the show was thrilling. Thousands of people try annually, but only 400 get the call each year, so I already knew I was quite fortunate. Then I had three weeks of anticipation (and last-minute studying) before flying to California for the taping. Everyone there was so friendly and encouraging—the producers especially, but also the woman who did my makeup and the man who attached my microphone. The first time I saw the set was surreal, and the rest of my time there felt like a dream—meeting Alex, playing the game, going to bed after my first three games knowing I was the reigning ‘Jeopardy!’ champion, having to keep silent for months about the results until my shows aired, watching my shows at AUM with colleagues and students, hearing from friends and family across the country, and talking with local media about my experience. Honestly, I was so caught up in playing my games and my adrenaline was pumping so hard that I barely remembered the games themselves until I watched them, but everything else gave me memories I’ll always cherish.

What did you do with your winnings?

After setting aside enough for taxes (including California taxes and the fact that my winnings temporarily knocked us into a higher tax bracket for 2015), I did some practical things such as taking a big chunk out of our mortgage and helping my wife get a new car. I also did some fun things such as taking trips to New York City, London, and Paris.

Would you ever play on “Jeopardy!” again if invited to return?

I came close to being invited back to play in the Tournament of Champions and would have done so if they invited a second alternate. I was disappointed I didn’t have that chance—not just because, of course, I would have liked to win more, but also because the experience was so amazing that I wanted to do it one more time. Alex Trebek was a major part of that.